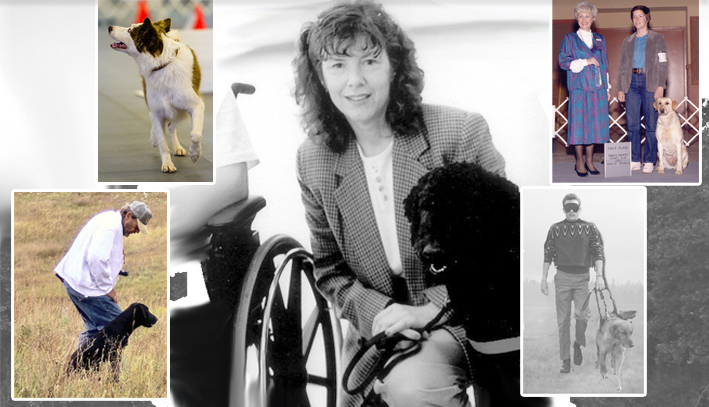 The Butlers don’t just work with YOUR dogs.Their personal “play time” is spent with their dogs — and they are VERY good at both!

It is not enough for the trainer asking for your  dollars to have always loved dogs. Even if you don’t think performance titles matter for YOUR dog, shouldn’t the person who works with your dog be an accomplished trainer? At the higher levels, performance titles provide peer-approved recognition of exemplary training and handling skills. When you ask a trainer, “What have you accomplished with dogs?” performance titles provide proof of results, not just theory. It is not enough to claim to have trained dogs for ten years if one has merely repeated the same six months’ inexperience twenty times over! Dennis and Kris can boast a long history of the highest levels of success in the world’s most respected competitive dog sporting venues!

KRIS BUTLER IS AN EXPERT IN THE WORLD OF THERAPY DOGS

• Served as an adjunct faculty member in University of Denver’s Graduate School of Social Work. From 2006 – 2008, she worked in development and served as instructor of DU’s online Animals and Human Health certificate program.

• Developed an animal-enhanced experiential program at an alternative high school in Moore, OK, working with her trained dogs and a licensed family therapist to meet adjudicated students’ goals in communication and social skills. Transitioned the program to include volunteer animal/handler teams.

• Developed a goal-directed animal-enhanced experiential program for an elementary school in Norman OK, which included her trained dog, and a special education teacher which lasted 3 semesters.

• Introduced animal-enhanced experiential learning at another elementary school, Norman OK, working for one year with her trained dog and a special education teacher to meet goals of children identified as ED.

• At least 4 public school systems in Oklahoma have had teachers who have included their own trained dogs in educational environments after attending Kris’s Reaching People Through Dogs programs for educators.